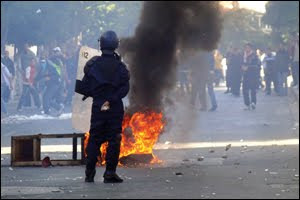 THE DISPOSSESSED people of Algeria are rising up against the spiralling cost of food.

Reports the Magharebia website: "In what many say is the largest wave of protests in more than two decades, thousands of unemployed youths have taken to the streets of Algeria to unleash their anger.

"The Algerian cabinet agreed on Saturday to lower the custom duties and taxes on sugar and other food stuffs by 41% as a temporary act to cut prices. But the measure, which will last through the end of August, did not end days of conflict in the streets between angry youth and security services."

Interior Minister Daho Ould Kabila said that more than 1,000 young people were arrested and three killed. The minister also said 736 security officers and 53 demonstrators were wounded in the violent clashes.

The first demonstrations broke out Tuesday night in the westerns suburbs of Algiers. The riots began growing in intensity on Wednesday, with protests in Oran, the country's second largest city. Later on Wednesday evening, the unrest spread to the working-class district of Bab El Oued in central Algiers. This set the scene, and one by one, the other working-class districts of the capital followed suit.

By Thursday evening, riots had broken out in a total of 24 of the country's 48 wilayas, reports the site.

"I was born in the slum, I grew up with promises of being re-housed in decent accommodation," 19-year-old Mohamed told Magharebia. "Nothing, no job, no training, just pick-pocketing and unofficial odd jobs. The state did nothing for me, and this is my way of revenge for that state that ignored me."
Posted by The Vast Minority at 23:32