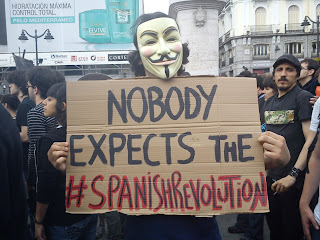 Clearly frightened of the surge of people power witnessed over the last couple of days, the local Electoral Junta has declared the gathering illegal.

The aim tonight will presumably to frighten off casual protesters and then use the police to attack anyone who dares defy the ruling.

Already it is being reported that police are packing out the Metro system, demanding people's ID and using loudspeakers to announce the protest has been prohibited.

Once again, the facade of western neoliberal 'freedom' is exposed as a lie. When the capitalist system feels under threat it will always resort to its monopoly of violence, even against specifically non-violent dissenters.

The hypocrisy of condemning the regimes in Libya and Syria for behaving in exactly the same way is simply staggering.

The Vast Minority urges our fellow freedom-fighters in Madrid to resist for all they are worth - tonight and every night.

For latest information follow #spanishrevolution (or, with rumours that this is being censored, perhaps #nonosvamos - we're not going) on Twitter.
Posted by The Vast Minority at 10:06