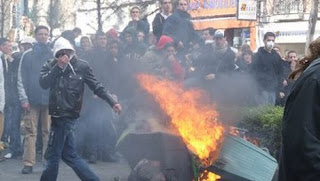 RIOTS broke out in a suburb of Paris over the weekend, after youths ambushed police.

The cops and the fire brigade turned up in Sartrouville at 3am on Sunday to deal with three burning cars.

French media explained this was a "trap" and they were set upon by 40 youths, who threw stones at them and damaged vehicles.

Police then used teargas and "flashball" rubber bullets against the rioters.
Posted by The Vast Minority at 23:16