Class war hotting up in UK 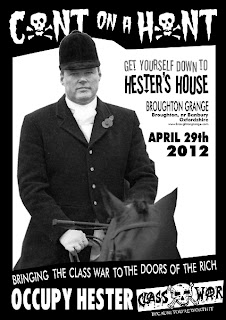 THE class war is hotting up in the UK, reports anarchist blogger Ian Bone.

His site features a new poster for an 'Occupy Hester' action against Stepehen Hester, the fat cat banker and fox-hunting toff, who is holding an open day at his Oxfordshire country estate, Broughton Grange, on April 29.

Meanwhile, hunt opponents have successfully stopped a group of hunters from Eton College, number one school for the offspring of the rich elite, from killing any wildlife.

Says the report: "Given what the majority of people end up going into later in life after their Eton education, the kids you see in these photos are likely to be the MPs, politicians, bankers or stockbrokers of tomorrow.

"And here they are gearing up to chase a defenceless creature around the countryside. Later they could be picking on  the vulnerable in their new roles as MPs etc. It’s all a good day of sport to them."

Comment Bone: "The class war is hotting up. From Broughton Grange to Eton - when they look out of their windows, we'll be there!"