Greece: updates from the front line 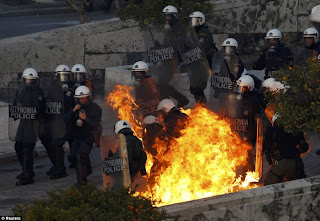 MAJOR battles broke out on Sunday in the streets of Greece - the current front line of the global resistance against neoliberal fascism.

Live streaming of events in Athens can be seen at http://prezatv.blogspot.com/2012/02/live-stream-from-athens-general-strike.html

Regular updates are being made on the From the Greek Streets blog.

Here are the last few entries at the time of posting.

19:50 Quite a few injured demonstrators. On the Propylea of Athens University take place harsh battles at the moment, people report of head to head clashes. The Law School occupation has defended all police attacks and eventually it  remains there, More than 500 people in the school now. The occupation calls for Red Cross medics who are on the streets to go towards the school with first aid material as there are injured demonstrators in the School.

19.40 At least five open fronts on Fillelinon str, on Othonos, Syntagma square, Stadiou and behind the ministry of Finance. Face-to-face clashes outside the Law school. Things temporarily calm down outside parliament.

19:07 A block of demonstrators on the corner of Othonos & Amalias st, on Syntagma square blockaded police offensive and big crowd of people gathered there and gradually moved back towards the House of Parliament.  A few minutes ago police units joined forces and attacked to that group.

Keep up to date with the global insurrection - follow VM on Twitter.
Posted by The Vast Minority at 10:24