Fourth day of battles in Egypt 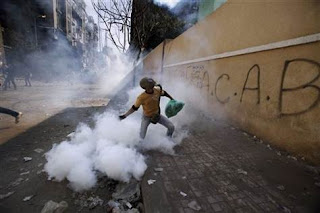 FIGHTING in the streets of Egypt continued on Sunday for the fourth day in a row.

There were reports of live ammunition and unlabelled canisters of tear gas being used against rebels in Cairo.

Plain-clothes police were also said to be attacking and abducting opponents of the SCAF regime.

In the days since the football stadium massacre at Port Said, more and more witnesses have come forward to confirm state involvement in the deaths, raising hatred of the military rulers to new levels.

Keep up to date with the global insurrection - follow VM on Twitter.
Posted by The Vast Minority at 11:22