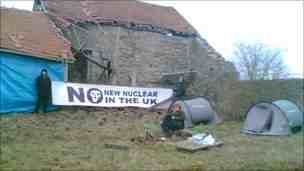 PROTESTERS have for the second time in a week occupied the development site at Hinkley Point nuclear power station in Somerset, south west England.

In the early hours of the morning anti-nuclear activists took possession of an abandoned farm on the site which is protected under International Environmental law.

The site contains a Site of Special Scientific interest (SSSI) and a protected wetland site but it is due to be cleared by power company EDF in the coming months.

Protesters are angry that permission has been given for this work to begin before the company have won permission to build their controversial new nuclear plant.

Somerset born Theo Simon said "We want to reclaim this land and make sure that the wildlife that inhabits it and forages here is protected.

"Giving permission to clear the land before Planning Permission has even been granted clearly gives the message to EDF that permission is a done deal. I, and many others like me, want proper public consultation and debate before we commit to a technology whose toxic legacy will remain for generations.”

Local media reported this week that EDF will begin site clearance in the coming weeks, although EDF claimed the opposite when protesters occupied the trees on Tuesday.

The first phase of the preparation works will include removal of hedgerows and all trees, before stripping all topsoil and levelling the landscape, all this despite the fact that planning permission has not been granted for a new nuclear power station at the site.

Shana Deal, one of the occupiers in Langborough Farm, said today: "If EDF's activities continue, this nature reserve will be lost forever. Not even EDF are willing to guarantee that a new nuclear power station will be economically viable, and I for one do not want to see this beautiful land turned into a toxic waste dump.”

The farm premises is accessible by public footpaths and visitors are being welcomed by the protesters.

Keep up to date with the global insurrection - follow VM on Twitter
Posted by The Vast Minority at 11:31