US activists plan to shut down corporations 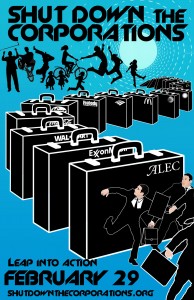 OCCUPY activists across the USA are preparing to shut down corporations on February 29.

Occupy Portland’s call to action against the American Legislative Exchange Council even made its way south of the Mexican border to Occupy Mexico City.

At last count 61 occupied cities have consensed to to organize actions against ALEC corps ranging from Freeport McMoran in Phoenix, to Walmart in SoCal, to BOA in Portland, reports Occupy Uprising.

"Judging by the amount of planning that has gone into Occupy Phoenix’s multi-location rallies and actions and the rumors coming out of other occupied cities this could be the biggest mass solidarity action since the November port shutdown called for by Occupy Oakland, or October’s initial call to action.

"On Oct. 15 Madrid Spain came out in force with 500,000 activists, if every occupied city could pull even a 1,000th of that this would be a national mass action of unprecedented proportions.

"Occupations everywhere are calling for the mobilization of individual affinity groups to organize their own actions focusing on corporations that are members of ALEC, or exposing legislators who are members.

"The call has been made, and it is time for all people who stand in solidarity against the evils of capitalism and ALEC to organize, be heard and take the occupation right to the door step of this false corporate monarchy."

Keep up to date with the global insurrection - follow VM on Twitter
Posted by The Vast Minority at 22:31