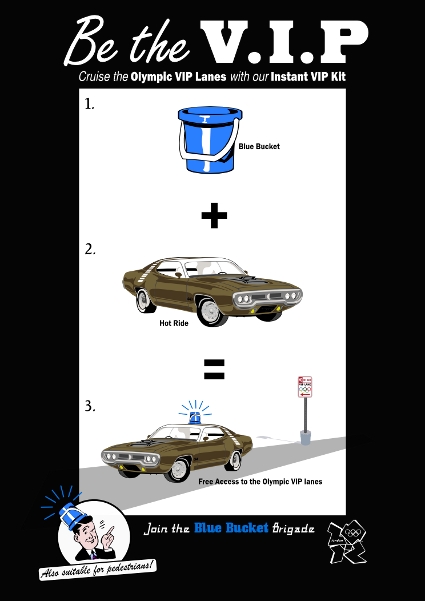 ANTI-OLYMPIC protesters in London are planning to target controversial VIP lanes with a 'blue bucket' campaign.

Anarchist blogger Ian Bone says: "To take the piss out of the VIP lanes with their flashing blue police escort lights everyone is encouraged to stick a blue bucket on their car roof…or bicycle or head.

"That’ll do fine as an action everyone can relate to – the more daring may want to join the VIP lanes on the first day or the days before and after.

"The beauty of the idea is that everyone can do it – all over London with blue buckets on their roofs and tooting their horns it will be saying  WE ARE ALL VIPs.

"Others who want to take the blue bucket tactic further can devise their own actions. The whole campaign will have everyone laughing at the expense of the VIPs.

"Spread the idea comrades. this will be far better than a demo or whatever LET'S MAKE IT THE BLUE BUCKET OLYMPICS."

The lanes, which will be implemented across 39 miles of road in central London, will allow 80,000 accredited members of the ‘Olympic family’ - not just athletes, but also officials and sponsors, to by-pass congestion on the busy roads, even when they are not heading to Olympic events.

Effectively, this creates a privileged class consisting of bureaucrats and bosses of multinational corporations like McDonald's and Coca-Cola.

Their vehicles will even be given priority over non-999 ambulance journeys.

Undercover investigations by Channel 4 have revealed that rich businessmen were being offered the chance to ‘buy’ access to the VIP road lanes for £20,000 a head.