Call-out for a new European network 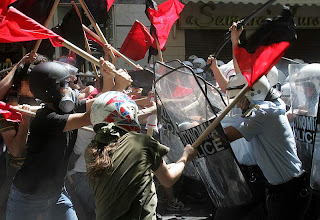 A CALL-OUT has been made to European comrades by rebels planning a new international network.

The Occupied London group, which produces the much-read From The Greek Streets blog, has issued the following statement and asked for it to be widely reposted and translated.

The world around us is changing beyond recognition. In the past few years, months, weeks and days, things we were once used to – from the quality of life we could expect, our interaction with others, our politics, just about everything – seem to vanish into thin air.

This crisis has been a systemic one, to be sure, but the collapse of the certainties of capitalism has left so many of our own certainties naked. At a time when action is more urgent than ever, at a historical turning point, change has been so sweeping that it paralysed many. Before, we were trying to learn how to create cracks and open new paths in the solid certainties of the neo-liberal frenzy. Now, cracks wide open, we want to pull out its insides and disentangle ourselves through a generalised and indefinite social strike (1).

We are members of Occupied London, an anarchist project that started in London, UK in 2007, printing journals and writing texts on urban realities from an anarchist perspective. When the revolt of 2008 kicked off in Greece, some of us felt the need to return there to report on and translate into English what was happening in the country’s cities from the ground.

Nearly 1,000 blog-posts and one book later, we are absolutely determined to keep on writing about what is happening on the streets and in people’s everyday lives as capital strikes its final blows in our daily lives preparing for its departure, leaving only the violence of the state behind to defend their pipelines of wealth.

We now see a need to grow, to become even more relevant, to move beyond the usual political subdivisions and beyond reacting to capital and state violence and grasp seriously this moment of rupture. Our contribution in this direction is this call to effectively share analysis and coordinate action across Europe.

Information coming from the mainstream media intends to divide us: it seeks to put the blame for the crisis first on the laziness of one People, then on the greed of another. In the mainstream media, people are seen as isolated victims or as a mass of protesters, but never as thinking, desiring and acting people who can take control of their own futures in common. This is a new battlefield where our conditions of living, producing and reproducing will be set for generations to come.

With this call-out we are seeking new comrades and friends. Whether you are an individual or group, get in touch. This is a project that aims to be as wide as possible; there is space for everyone feeling close to our wider social antagonist movement, but no space at all for sectarianism of any sort. The way we envisage this network, each local information point will operate in a completely autonomous way, while a main node of information will gather all local material at one place, tagged in a way that makes the content as practically useful as possible.

Dissemination of information and analysis across Europe and beyond, and coordination of action are our main aims.

This is very much a work at progress. So contact us at editorial@occupiedlondon.org and we will be more than happy to discuss any details. Members of our collective are travelling to various places in Europe in the next few months to discuss the idea as far and wide as we can. If you want to host an event and get to discuss the project in person, get in touch.

(1. By generalised social strike we mean the systematic -but wildcat- pause of our normal activities (working, consuming, using networks etc.) and
extracting it from the sphere of capital, combined with marching and occupation of public spaces, taking place to as many countries as possible
simultaneously. So we overthrow the normal and sovereign flows of capital, products and information.)

With love,
The Occupied London collective
Posted by The Vast Minority at 22:31