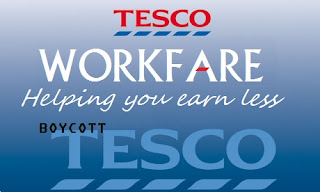 OUTRAGE is growing in the UK over a government-sponsored slave labour  scheme.

Not only does the workfare project mean people working for nothing more than their benefits and other workers losing out on overtime and potential paid employment, but it also acts as a giant tax-payer hand-out to profit-making corporations.

As details of the scheme have become known, particularly regards the Tesco supermarket chain, there has been widespread anger and now a national day of action is being called for Saturday March 3.

"We’re planning a Boycott Workfare action in Central London on this day and encourage people all over the UK to take action on their high streets.

"So many high street stores are involved in taking on forced unpaid labour that there is plenty of choice – Tescos, Asda, Holland & Barrett, Primark, HMV, TK Maxx and Topshop to name but a few. Get a group together, make a plan, and head to the streets.

"Workfare means that those on benefits are forced into unpaid work for multi-million pound companies. Instead of the living wage – they receive £2.25 an hour in benefits for 30 hours of work.

"Workfare means those in paid positions may see their jobs replaced by this unpaid labour. Why would a company pay for people to do these jobs when they can get free labour from the Job Centre?

"We can put a stop to this forced unpaid labour – Waterstones and Sainsburys recently announced that they would no longer take unpaid placements – the other companies just need a bit more encouragement to stop this exploitation.

"We demand an end to this exploitation and call for welfare rights and living wages for all!
If you continue to exploit us we WILL shut you down!"

John Harris wrote on The Guardian's website on February 16: "The crucial point is that unpaid work – bad enough when it applied to supposed 'interns', but grim beyond belief when used on the unemployed – is now being built into what some people call The New Normal.

"Given the thousands involved, it clearly represents a boon to the kind of multinational giants whose profit margins must be creeping upwards thanks to the plentiful supply of people – and please, all you free-marketeers, read this bit slowly – effectively paid a pittance to work for them by the taxpayer."

Protest details so far for March 3 are:

Keep up to date with the global insurrection - follow VM on Twitter
Posted by The Vast Minority at 11:22