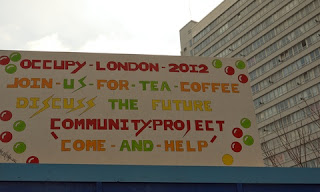 OCCUPY London activists have opened a new squatted centre near Old Street, the heart of the City.

They say: “It is a deserted primary school with loads of beautiful airy classrooms, a small gym, and some pleasant outdoor space.

“It has lain unused for three years and the owners are awaiting planning permission before demolishing. in the meantime, the hope is to put it to good use for the community.

“Since being quite violently evicted from the UBS-owned 'bank of ideas' squat, the campaigners have tried to occupy three further buildings, each time facing swift but illegal evictions at the hands of the police.

“However, this time they have made the new space secure, and after preparations over the past week, they are now opening up to the public.

“The new occupiers have, so far, set aside a co-ordination office, an art project, a cinema, and a well-being area, as well as a cafe in the large reception hall and an exhibition covering the history and struggle of squatting.

“They intend to run a bike workshop, an internet cafe and tech area, gardening and permaculture training, and video and media projects including livestream.

“Currently they are inviting people in to the free/donation cafe, and they are open to offers and ideas for positive use of the other spaces available.

“The space will be open to the public from Tuesdays to Sundays from midday to 8pm each day.

“Among the projects starting up, there will be a continuation of the 'free university' initially started at the 'Bank of Ideas', where more than 400 talks, lectures, workshops and meetings took place over a couple of months.

“This was all run by more than two dozen professors who, unhappy at the introduction of £9000 fees, offered alternative qualifications there for free. among the many subjects covered were alternative economics, self-defence, and building renewable structures.

“The new site, on the corner of Bunhill Row and Featherstone Street, was a purpose-built primary school until closing in 2009, and so it is decorated in lots of bright colours, gaining spectacular light from circular ceiling windows and glass walls.

“It has been empty for three years. the owners, the Southern Housing Group, are hoping to demolish it and turn it into flats, but are awaiting planning permission for this, and in the meantime it is hoped they might be amenable to its use for the community. contact has already been made and an initial meeting set up.

“The new website www.schoolofideas.org.uk will publicise all workshops and events and you can also call the info line on 07954 227762.” 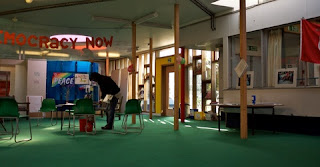