Chilean youth rise up against system 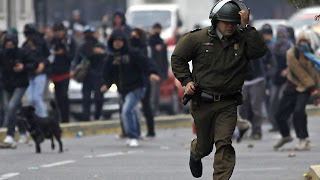 CHILE has erupted into massive demonstrations against neoliberal rule and police state repression.

The focus is on the education system and students are at the forefront of the revolt, but the roots of the discontent spread much further and arise from the same revulsion at the dominant death-system that is being felt all over the world.

As well as resisting cop violence, protesters seized a TV station, demanding the right to a live broadcast in order to express their demands.

After being teargassed on Thursday, student leader Camila Vallejoo called on citizens to show support for the striking students by banging pots and pans at 9pm – a reminder of the call to the streets used in the Pinochet era.

Reports The Guardian: "Her call spread like wildfire on social networks and led to a night of clanging celebrations, spontaneous street festivals and a national realisation that Chile is living a historical moment, with a movement that cuts across traditional social and class boundaries."
Posted by The Vast Minority at 00:48