Afghan rebels down US chopper 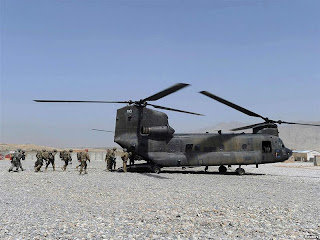 AFGHAN rebels have shot down an American Chinook helicopter in one of the most spectactular successes in the long war against neoliberal occupation.

Said a statement from the Afghan resistance: "New reports from Wardag province indicate that a heavy clash unfolded last night at about 11:00 pm local time in Syedabad district of the province between Mujahideen and the invaders resulting from the enemy’s raid on the civilians which was faced with sterner resistances by Mujahideen who fought back the enemy and shot one of the invaders’ helicopters with rockets during the fighting.

"The reports add the dead and wounded were evacuated by 8 ambulance helicopters, while 8 Mujahideen became martyred in the enemy airstrikes during the fighting.

"The wreckage of the struck helicopter is said to still exist in the area the debris of which is lying scattered at the scene."
Posted by The Vast Minority at 01:08