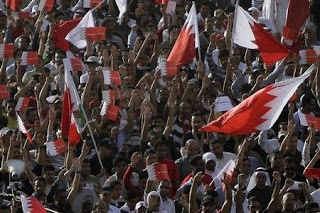 PROTESTS have been held all over the world to mark Al Quds Day, an annual event suppporting Palestians suffering under Israeli occupation and oppressed people everywhere.

Reports Press TV: "In defiance of a government ban on Quds Day rallies in Bahrain, protesters have taken to the streets (above) to mark the international event and have set fire to the Israeli flag.

"Witnesses say hundreds of Bahrainis took to the streets in the capital, Manama, and several villages to protest against the government ban on the anti-Israeli rally and show solidarity with Palestinians.

In another report, it says: "Tens of thousands of Egyptians have staged a massive anti-Israel protest, demanding an end to the peace-accord between Cairo and Tel Aviv.

"Following the Friday Prayers, protesters and activists gathered in several cities and Cairo's Liberation Square to stage a million-man demonstration.

"Egyptians called for the expulsion of the Israeli envoy and chanted anti-Israeli slogans."

Al-Quds Day is named after the Arabic word for Jerusalem and its environs, the Holy Land. Yawm Al-Quds or Al-Quds Day is a day of solidarity with the oppressed Palestinians in their struggle against the Zionist-Apartheid system of Israel. Al-Quds Day also extends beyond Palestine to support all oppressed people in their struggles across the world. All over the world seminars, rallies and marches are held on this day, the last Friday of the holy month of Ramadhan in order to pledge solidarity with those seeking peace through justice.
Posted by The Vast Minority at 09:13