Britain wakes up to police state 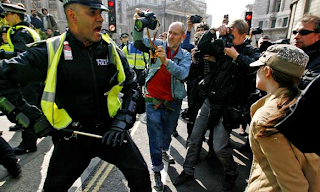 POLICE state represession of dissent in Britain is becoming increasingly obvious to the public, as the crumbling neoliberal system lashes out at opponents.

Absurdly vindictive jail sentences for student protesters and the man who threw foam in Rupert Murdoch's face have fuelled unease as a long-term reality becomes impossible to ignore.

One of Britain's most prominent human rights lawyers has likened "heavy-handed" and politicised treatment of student protesters to the brutal victimisation of the miners during the strikes of the Thatcher era.

Michael Mansfield QC said "outrageous" tactics were being employed to quash political protest and peaceful demonstrations in the UK, within politics, the police and the judiciary.

He told The Guardian: "We praise those in the Arab spring and condemn the force used against them by their governments, yet allow our own rights to be eroded," he said. "What is happening here? A direct attack is being made on the right of people to go out on the streets and show their solidarity and unity with others of the same opinion and hold peaceful protest."

Raj Chada, a lawyer with Hodge Jones & Allen who represented Jonathan May-Bowles, the man jailed for throwing shaving foam at Rupert Murdoch, said he had real concerns that a person now arrested during a political protest could expect harsher treatment than someone who committed a similar offence when not at a protest: "The fact they are at a political protest is now being treated as an aggravating factor, rather than a mitigating factor."

The tough approach by police and judges was having its desired effect, he said. "When I have spoken to protesters, some on the fringes say they do not want to go on protests any more. There are real concerns that the judiciary is being unduly harsh on political protesters."
Posted by The Vast Minority at 00:59