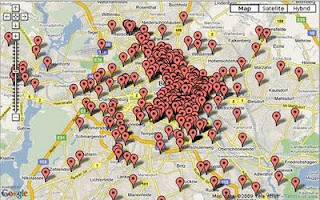 THE car-burning insurrection in Berlin is turning up the heat on the German authorities.

"At night all over the city, cars are burning on the streets of the German capital," reports The New York Times.

"The federal police have been called in to help. Helicopters with infrared cameras can be heard buzzing overhead, and citizens are talking about forming watch groups. About 90 cars have been set on fire in the past two weeks alone.

"In light of the recent outbreak of rioting in London, it might seem as though Berlin was the site of the Continent’s latest unrest. Yet incongruously, the city is otherwise peaceful.

"Burning cars as a political statement dates back a decade here; hundreds go up in flames every year. Add copycats, insurance fraud and petty acts of revenge to the mix and a chronic illness has flared into an epidemic — with the burned-out chassis of BMWs, Mercedes-Benzes and even a backhoe and a garbage truck filling the news. The record up to this point came in 2009, when 401 automobiles were set on fire. Already this year, however, 364 cars have been set ablaze.

"Of particular concern is the possibility that the arson attacks, which are also a problem in Hamburg, could signify the stirrings of a militant domestic movement, just as the Red Army Faction made its presence known in 1968 with two department store fires in Frankfurt."