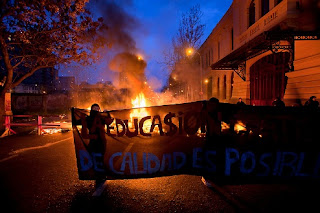 REBELLION against neo-liberalism in Chile has intensified, with trade unions backing the long-running student rebellion.

Reports MercoPress: "The Chilean capital Santiago was witnessing another tumultuous day on Wednesday as protests started to sweep the nation’s capital and unions called for a two day nationwide shutdown to protest the educational system.

"On the last two months mass demonstrations emerged in Santiago - along with other important Chilean cities – calling for improvements in Chile’s educational system. Demonstrations have drawn over 100,000 supporters to the streets of Chile’s capital.

"One union official stated 'this will be the biggest national strike of the last decade'; others have threatened to block roads (including those to the airport). Transportation workers and day-care providers also plan to strike, stranding millions of other Chileans.

"While previous governments have faced one-day national strikes, it was the first 48-hour national strike since the 1973-1990 Augusto Pinochet dictatorship."
Posted by The Vast Minority at 23:14