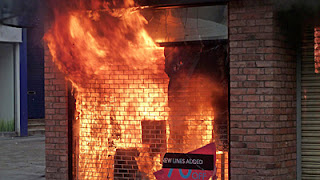 RIOTING spread further across the rest of the UK on Tuesday night, as the state swamped the capital with 16,000 police.

There were major outbreaks of unrest in Manchester, Liverpool, Birmingham and Nottingham - where a police station was attacked - with Leicester, Loughborough and Gloucester alshttp://www.blogger.com/img/blank.gifo affected, among others.

With the mirage of 'law and order' dispelled, an increasingly fraught British state seems to be edging towards deploying the army on the streets to hold down its own underclass.
Posted by The Vast Minority at 22:18