'I saw cops shoot my brother' 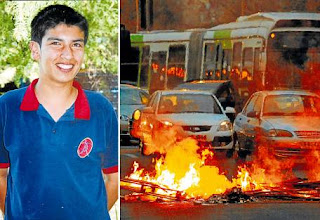 IT'S THE same all over the world - cops will lie through their teeth to avoid paying the consequences of their state-endorsed thuggery.

It has now emerged that the Chilean police are claiming they had nothing to do with the death of 14 year old Manuel Gutiérrez Reinoso (above) and - rather tellingly - are not going to be holding an internal inquiry.

This is despite the fact that numerous witnesses have come forward to say they saw police shoot the teenager, who later died from his wounds. But, as usual, the evidence of "non-people" on the streets counts for nothing in the eyes of the state.

"One of the shots hit my my brother and knocked him down. I saw a policeman firing from the car. He shot at people. My brother told me, 'they got me'. He pulled his bloody hand off his chest and there was a hole there."

Fearful of an angry public response, police are spreading the rumour that Manuel was killed in gang related violence coincidentally taking place at the same place and time.
Posted by The Vast Minority at 04:19