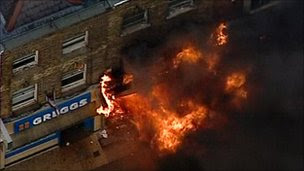 RIOTS were spreading all across London on Monday night, as pent-up anger at the capitalist system and its brutal police broke out.

Hackney, Peckham, Lewisham, East Ham and Croydon were all said to be hit by unrest, with reports coming in of incidents in Birmingham, Wolverhampton, Liverpool and Leeds.

Clapham Junction was also a focus - locals were helping themselves to the contents of Debenhams, with no police in sight.

A Google map has been set up here.

Power cuts are also being reported.

There is an increasing sense of panic from the state and its media apologists, with the forces of law and order increasingly unable to maintain the illusion that they have the numbers to hold down a rebellious population.

Naive people who believe in the myth of protective authority are becoming confused as to why it hasn't all been "sorted out".

Ian Bone's blog has updates plus, of course, Twitter.
Posted by The Vast Minority at 11:57