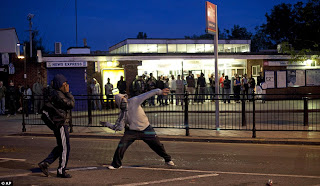 RIOTS in London suburbs continued on Sunday night, spreading to a wider area.

And doubts have emerged about the police account of the death of Mark Duggan - the catalyst for the street rebellion.

While great play was made of a bullet lodged in a police radio, apparently fired by Duggan before he was shot dead, it is now clear the bullet was from one of the police's own guns.

This is a familiar pattern for deaths at the hands of cops - the killing of newspaper vendor Ian Tomlinson in 2009 was also cloaked in layers of lies.

Right-wing media have taken to describing the London rioters as "anarchists" - probably inaccurately but a sign that they understand the underlying political nature of the uprising.

London endured a second night of violence last night as questions were raised about the shooting by police of a suspected gangster.

Reports The Daily Mail: "In Enfield a mob of 200 anarchists smashed their way into shops and lobbed concrete slabs at police cars following Saturday’s riot in Tottenham.

"A jewellery store, a McDonald's and a Tesco were set upon in Enfield, while in Brixton, South London, hundreds of teenagers looted a Footlocker store before setting it on fire, requiring six engines to battle the blaze at 1.30am.

"Police reported more than 100 arrests too place across the capital overnight.

"Last night there were also reports of disturbances Walthamstow and Islington in North London, and sporadic clashes with police in Elephant and Castle in South London and Shepherds Bush in the west.

"Three police officers were hospitalised after they were stuck by a fast-moving vehicle while trying to make arrests after looting in Chingford Mount, Waltham Forest."
Posted by The Vast Minority at 22:55