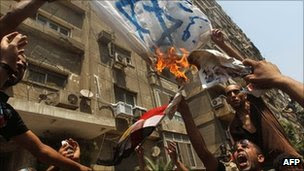 ANGRY crowds have besieged the Israeli embassy in Cairo after five Egyptian policemen were killed by the unpopular neighbouring state.

Reported the BBC: "More than 1,000 Egyptians protested outside the Israeli embassy late on Saturday night. They demanded the immediate expulsion of the Israeli envoy from the country.

"Military police stood outside the embassy, but did not intervene when one protester pulled down the Israeli flag."

Press TV added that the young Egyptian protester had replaced the flag with Egypt's.

It said: "Amid ongoing protest of thousands of Egyptians in front of Israel's embassy in Cairo on Sunday, Ahmad al Shahhat climbed the building and removed the Israeli flag.

"Following the move, people cheered and honked their car horns as protesters prevented police from arresting the young man."