Riots break out in Hamburg 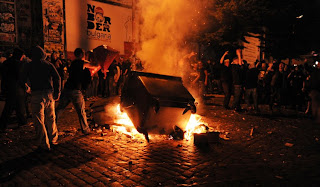 RIOTS have broken out in Hamburg, Germany, after a lively summer street festival was swamped with thousands of police.

Reports Deutsche Welle: "Police used water cannons against rioters in the north German city of Hamburg on Saturday evening, August 20, following a street festival in the district of Schanzenviertel.

"Disturbances began when a group of unknown individuals tried to break into a branch of the German bank Sparkasse in the district, a police spokeswoman said.

"The incident took place close to the former Rote Flora theater - an alternative left wing rallying point in the city.

"Water cannons and riot personnel were deployed and used against the perpetrators, police said, with numerous fires also extinguished in the area."
Posted by The Vast Minority at 02:50