Greek revolt - 'the fear has gone' 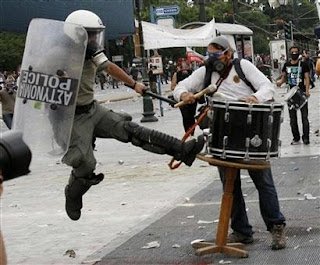 THE MOOD of resistance of the Greek people is hardening, after 'austerity' laws were imposed and brutal police violence unleashed against them.

Thursday night's people's assembly in Syntagma Square was one of the biggest ever, reports From The Greek Streets.

Says the blog: "The waves after waves of police violence during the General Strike of June 28-29 deterred no-one.

"Once again, thousands took to the streets and gathered in Syntagma to protest against the memorandum, the troika, the government but also, this time, the police.

"The change in the atmosphere was quite stunning, with anti-police slogans chanting through the air. The rage of the previous days was there, but the fear was gone."
Posted by The Vast Minority at 23:17