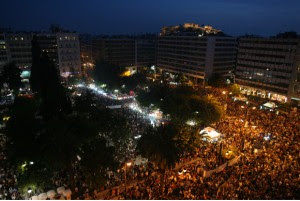 A MASSIVE crowd of 100,000 or more gathered in the centre of Athens on Sunday night as the Greek crisis intensifies and the June 15 general strike approaches.

Reports From the Greek Streets: "A crowd whose size is difficult to even estimate gathered in central Athens to protest against the crisis and the Memorandum tonight.

"The call to a pan-european call of action saw more than 100,000 (some estimates give much higher numbers) flooding Syntagma square and many central nearby avenues.

"In contrast to previous gatherings, police presence was much higher, with fencing erected around the parliament building and double, or triple rows of riot police around it.

"The city is now building up for the General Strike of June 15th, which is also the next date of action announced at Syntagma square.

"Both mobilisations are aimed against the new agreement between the government and the troika (IMF/EU/ECB) which is planned to be voted at parliament on the morning of the 15th.

"The general assembly of Syntagma square has already called for a blocking of the parliament from the night of the 14th. In addition to the fencing installed around the parliament, a police water cannon has also appeared nearby.

"Similar demonstrations took place in Thessaloniki, Patras, Heraklion, Larisa, Volos and many other Greek cities. In the Cretan city of Chania, fascists bearing arms appeared in the gathering, in a failed attempt to provoke the gathered crowd."
Posted by The Vast Minority at 00:26