Crucial day in battle against neoliberalism 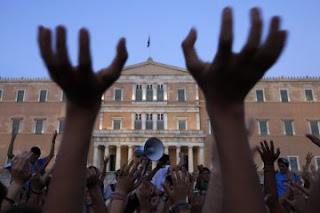 Buoyed by last weekend's turnout of 100,000 people in Athens city centre, the real democracy movement is calling for a massive blockade of the parliament on the day of the general strike and the vcote on the new "austerity" measures.

The following is the latest report at From the Greek Streets:

Last night (June 11th) the popular assembly of Syntagma square announced a call to blockade the Greek parliament ahead of the voting of the so-called Mid-term agreement between the Greek government and the troika (IMF/ECB/EU).

The new agreement includes wild tax increases, the further slashing of wages and pensions and the lay-off of approximately more 100,000 civil servants in the next few years.

The call-out for the blockade below is one of the most important acts we have seen by the Syntagma assembly so far. June 15th is gearing up to become a historical day in Greece, a crucial chance to block off the charge-ahead of neoliberalism here.

Don’t be a spectator to this – translate and disseminate the text below; organise a gathering where you are, or come join us at Syntagma. This is the struggle for and of our lives.

24 hours in the streets!

We give our own RESPONSE to the MIDTERM AGREEMENT

Now that the government is trying to vote in the mid-term agreement, we encircle Parliament, we gather and we stay at Syntagma.

All together, we continue and strengthen the mobilisations that began on May 25th. Our first stop is the General Strike of June 15th. We won’t stop until they withdraw it.

We support by all means the General Strike and we demonstrate peacefully. On June 15th, we do not work and we do not consume. We coordinate with all citizens who want to express their disagreement to the mid-term agreement, with the strikers and their unions, with the popular assemblies, with mobilisations and occupations across the country. We call artists to support the mobilisation, to take to the streets with us and to give it their own touch. We will have three big meeting points:

Everyone on Wednesday June 15th, at 7 am:

1. In front of Parliament

2. At the metro stop Euagelismos

3. At the Panathenaic Stadium (on Vasileos Konstantinou Avenue)

Until June 15th we will be going all over Athens to make sure that the call of the Popular Assembly of Syntagma is spread everywhere. We give a meeting of struggle for the day of the voting in of the Mid-term agreement.

Popular Assembly of Syntagma Square
Posted by The Vast Minority at 09:26