Days of anti-neoliberal resistance in Greece 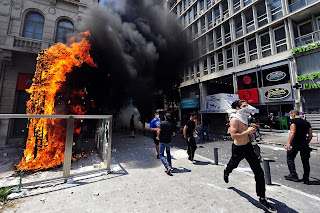 PEOPLE in Greece are saying 'no' to the insidious neoliberal 'austerity' measures being imposed on them via their corrupt parliament.

On Tuesday, as the 48-hour national strike began, fierce battles broke out on the streets of Athens as police once again demonstrated the limits to 'democracy' in a capitalist state.

Wednesday, when politicians are expected to vote through the measures despite massive opposition from the population, is likely to see even more dramatic clashes.

Updates are being posted on From the Greek Streets.

Live streaming from Syntagma can be seen here.
Posted by The Vast Minority at 23:16