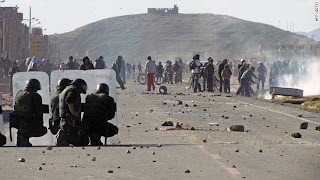 PROTESTERS in Peru have scored an astonishing victory against the destructive forces of global capitalism.

"One protest leader called for the group to reclaim the airport. Others said it was too dangerous. Then a call came through from the protest leaders in the capital, Lima.

"The government had given into their demands and agreed to revoke the licence for Canadian mining firm Bear Creek to open its Santa Ana silver mine in the area; as well, it halted all new mining concessions in Puno province for 36 months.

"The unrest ended with the agreement Saturday, narrowly averting a repeat of a bloody conflict the day before, when police killed at least five demonstrators at the airport.

"While the breakthrough agreement stopped further bloodshed, it casts doubts on other resource operations in Peru, a nation that relies heavily on foreign investment and receives about 70 per cent of its GDP from the mining industry.

"Peru is South America’s fastest-growing economy, driven by surging commodity prices, but the rural poor have benefited little from mining and complain it contaminates their water and crops.

"The incoming government must balance the interests of international resource firms, whose production is a huge source of national wealth, alongside those of protesters who argue mines have a devastating impact on the environment."
Posted by The Vast Minority at 23:34