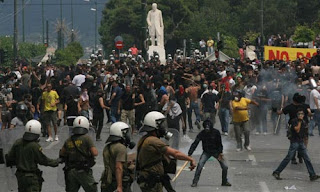 SOCIAL order is crumbling in Greece, with the state no longer able to manage its population.

That is the conclusion of the From the Greek Streets blog following dramatic events on Wednesday, in which a gneral strike and attempts to block the parliament ended in chaotic scenes of tear gas and police violence.

The significance of events for the whole neoliberal global system was reflected in corporate media reports focusing on the financial implications.

Wrote The Guardian: "The escalation of the Greek crisis had instant European and global impact, sending world stocks tumbling and exposing European Union paralysis over whether and how to launch a second attempt in a year to save Greece from insolvency."

Below is the report posted on From the Greek Streets on Wednesday night:

Syntagma, Athens, June 15th 2011. How to put to words what we lived in this square, over the course of a single day?

A society in some spectacular turmoil; the most unusual of suspects have now taken to the streets. Syntagma was meant to be the epicentre of today’s attempt to block off Parliament as called by the square’s popular assembly.

It was also the main focus point of the General Strike. At times, it felt like worlds in collusion: the naivety of pacificism, the fetischisation of anti-police violence.

And around this collusion, a myriad others… In Syntagma today we fought off the Neo-nazis of the Golden Dawn, who had the nerve to show up at a General Strike.

We saw the demonstrators’ clashing with police in the square’s South-eastern corner (for an unjustifiably long time) being followed by an astonishing, but only momentary, sweeping clean of the thousands on its square. People were trampled over tents, gassed like ants, fainting all over.

By the time that the Delta motorcycle police tried to come into play, people had learnt the rules of the game — and they pushed them off. Twelve hours of nearly uninterrupted beating, tear-gassing, running, fighting.

For these twelve hours, Syntagma compressed and showed naked the haphazard patterns into which people’s actions are cornered by this social order. A social order that is crumbling, an authority at loss, unable to manage its populace any longer. A regime that has fallen a while ago, only resting on the fallacy of some imagined national unity to try engineer change, to lengthen its days.

How can we possibly buy this? The hundreds of thousands who were out in Athens today already know: Syntagma was a storm; we are just waiting for the thunder.
Posted by The Vast Minority at 23:28