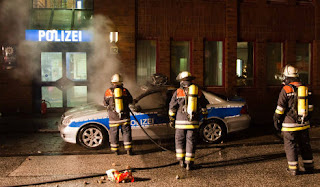 ANARCHIST attacks on police stations and political offices in Berlin and Hamburg over Thursday night were a “declaration of war” on the state, the head of the German Police Union (DPoIG) has claimed.

"Meanwhile local offices for the centre-left Social Democrats and the conservative Christian Democrats were also vandalised with anti-war graffiti.

"Around the same time in Hamburg, about 10 masked perpetrators attacked a police precinct in the Schanzenviertel neighbourhood, setting a police cruiser alight, damaging other police cars and breaking windows with stones.

"On Friday afternoon the Berliner Morgenpost also reported that a southern wing of the Chancellory had also been vandalised with three Christmas tree decoration bulbs full of paint."

The paper quoted DPoIG leader Rainer Wendt as saying that though no one was injured in either of the attacks they were a sign of a “new escalation in the spiral of violence”.

“The attacks were anything but spontaneous, and executed in an almost professional manner,” he said.

The Police Union took the incidents so seriously on Friday that they encouraged the conference of state interior ministers, currently underway in Bremen, to take immediate action, hardening criminal prison sentences for attacks on officers and increasing police personnel.

An 84-page study presented by Berlin Interior Minister Ehrhart Körting this November detailed left-wing violence in the German capital, describing the anarchists as “willing to hazard the consequences of major property damage and severe injury to people.”

In 2009, some 125 cars – many of them luxury status-symbol models – were purposely burned by Autonomen in Berlin. The number has more than doubled since last year, when 72 cars were targeted. Police in Hamburg reported 150 burned cars – 16 of which were proven to be politically motivated.

Wendt said without government support, such incidents will continue to occur.

“The investigation goes on, but I have little hope it will be successful,” he said. “This is a declaration of the war on the police and on the state.”
Posted by The Vast Minority at 11:27