Naxalite rebels hit back at oppressors 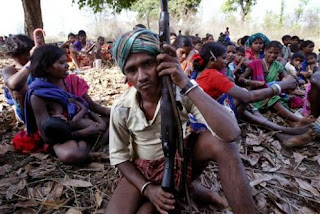 NAXALITE rebels in India have hit back at reactionary state communists involved in brutal attempts to crush their peasant uprising.
The Times of India reports today that the People’s Committee against Police Atrocities "ran amok in many places in Jangalmahal with its militia squad killing four CPM [Communist Party of India - Marxist] cadres and setting several vehicles and three oil tankers on fire".
The report adds: "They also set a sponge iron factory and a forest beat office ablaze.
"On Thursday night, suspected Maoists dragged two CPM cadres — Anil Chalak and Dayal Chalak — from Bandhgora in Jhargram and hacked them to death.
"Police found their bodies on Friday morning. A CPM leader escaped with injuries. Also on Thursday, Maoists beat a CPM supporter at Dherua in Kotwali."
The CPM, a leading part of the government in West Bengal, has for many years been involved in brutal repression of radical opponents and villagers trying to defend their rights, happy to brand whole rural communities as "Maoist" as a pretext for mass arrests and killings.
Naxalites are active across approximately 220 districts in twenty states of India, accounting for about 40 percent of India's geographical area, according to Wikipedia.
They are especially concentrated in an area known as the "Red corridor", where they control 92,000 square kilometers.
According to India's intelligence agency, the Research and Analysis Wing, 20,000 armed cadre Naxalites were operating apart from 50,000 regular cadres working in their various mass organizations and millions of sympathisers, and their growing influence prompted Indian Prime Minister Manmohan Singh to declare them as the most serious internal threat to India's national security.
The Naxalites are, needless to say, opposed by virtually all mainstream Indian political groups.