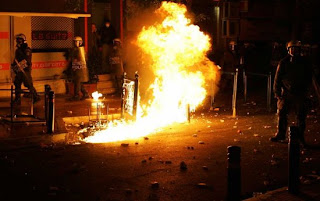 RESISTANCE continues on the streets of Greece, despite massive and vicious police repression.

Reported the Occupied London blog, live from Athens: "The oppression has no precedent. The state is clearly trying to terrorize the population, but until now the only thing that they achieve is to make everybody angry, and more people come out to the streets. The streets will will, or else the terror will win..."

It is clear that it is not just the Greek state that has a vested interest in propping up the corrupt capitalist system there and preventing real change after the cosmetic hand-over of power to the so-called "socialists".

The UK has already sent Scotland Yard officers to Athens to help fight the popular uprising on behalf of the global elite.

Said an anlaytical report on www.globalpost.com: "U.K. anti-terrorism officials are concerned that the next step in the year-long campaign of violence is for guerrilla groups to target foreign nationals in copycat assassinations of the type practiced by the now-defunct November 17 terrorist group. In October, unknown gunmen opened fire on a police station, injuring six officers and seriously testing the new government."

It quoted a Greek security expert as saying: “The British are more interested in preventing a new terrorist problem from gaining strength because they don’t want to get to the point where these groups move from bombings to assassinations.”

And it added: "Greece is a point of particular concern for European intelligence organizations. Aside from being the exposed southeastern flank of the European Union, it has a past of inspiring European leftism. The 1965 riots in Greece, known as the "Iouliana", were stomped out domestically but inspired the events of 1968 in western Europe."

On Monday more demonstrations took place all over the country. In Thessaloniki the turnout was even bigger then the previous day, estimated at 8,000-10,000.

Reported ABC News: "Riot police clashed with stone-throwing youths in Athens as violence marred a second day of demonstrations held to mark the fatal shooting of a teenager by police a year ago.

"Police charged the crowd with tear gas and made nine arrests after several hundred youths, some as young as 12, hurled stones at store windows and the security forces as some 5,000 demonstrators set off towards parliament.

"Another two youths were arrested for pelting a police station with stones as thousands of students rallied to pay tribute to Alexis Grigoropoulos, who was shot dead at age 15 during mass youth riots last year, a police source said.
Posted by The Vast Minority at 22:16