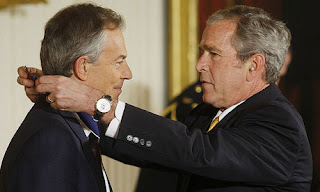 THERE are interesting signs that parts of the British establishment are finally rebelling against remote control from the USA.
In an article in The Times today, Sir Ken Macdonald, director of public prosecutions between 2003 and 2008, says former PM Tony Blair misled and cajoled the British people into a war they didn't want.
He writes: "The degree of deceit involved in our decision to go to war on Iraq becomes steadily clearer.
"This was a foreign policy disgrace of epic proportions and playing footsie on Sunday morning television does nothing to repair the damage.
"It is now very difficult to avoid the conclusion that Tony Blair engaged in an alarming subterfuge with his partner George Bush and went on to mislead and cajole the British people into a deadly war they had made perfectly clear they didn’t want, and on a basis that it’s increasingly hard to believe even he found truly credible."
He adds: "Hindsight is a great temptress. But we needn’t trouble her on the way to a confident conclusion that Mr Blair’s fundamental flaw was his sycophancy towards power.
"Perhaps this seems odd in a man who drank so much of that mind-altering brew at home. But Washington turned his head and he couldn’t resist the stage or the glamour that it gave him."
The extent of US control of leading British politicians remains a taboo subject on the UK political scene, although aired in a fictional form in Robert Harris's novel The Ghost, due to be made into a film by Roman Polanski.
And while today's attack on Blair presents the problem as personal rather than systematic, the fallout from the Iraq war may well open larger cracks in the post-WW2 transatlantic "special relationship".
Posted by The Vast Minority at 05:06