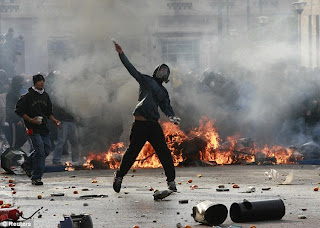 RIOTS broke out in Athens today after police attacked the demonstration marking the anniversary of the murder of Alexis Grigoropoulos by armed cops.

An eye-witness report said: "Today’s demonstration had around 15,000 people, met by around 10,000 cops on the streets. The demonstration was attacked only a few minutes after it started: Two eye-witnesses from Occupied London saw at least ten unprovoked arrests right the spot, on the corners of Panepistimiou Avenue and Ippokratous Street.

"In Exarcheia, riot police swept through the square. Around 100 of us tried to find refuge in the building of the Migrants’ Haunt on Tsamadou street. The pigs in uniform stood outside the building, tear-gassing through the windows and doors. Tear-gassing in an indoors space is, of course, potentially murderous attack."

The BBC website has a video of clashes, showing clearly the aggressive tactics used by the Greek state, now under "socialist" control.
Posted by The Vast Minority at 09:25