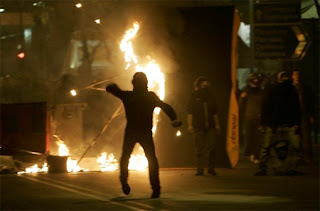 NEO-LIBERALS are scared that a growing anarchist movement in Europe will thwart their economic plans for the continent.
That is the opinion of Ambrose Evans-Pritchard, international business editor of the right-wing Daily Telegraph in London.
Says his December 20 article: "It is becoming dangerous to associate with economic and ideological power in Southern Europe, or what Europol calls the 'Mediterranean triangle' of anarchist violence."
He explained: "Southern Europe is being ordered to carry out IMF-style austerity, without the IMF-style devaluation required to rectify the massive imbalances that have built up between North and South under the euro. The victims are caught like France and Germany under the Gold Standard of the early 1930s, when society was broken on a wheel of deflation decrees. "
Listing examples of what he calls a "hard-Left resurgence", he records that Greece's Revolutionary Struggle detonated a car bomb at the Athens Stock Exchange in September and Citigroup's branches have been targeted twice this year.
In Milan, the Informal Anarchist Federation (FAI) planted 2kg of dynamite last week at Bocconi University, the symbol of the free market in Italy.
The FAI left a note threatening a "bloodbath" for capitalists. Security forces have issued alerts for the Milan bourse, Unicredit, and Barclays. Italians have begun to ask whether their country is returning to the 1970s, the "years of lead" when the Red Brigades murdered ex-premier Aldo Moro.
He adds: "The FAI is no friend of Europe either. It sent letter bombs earlier this decade to the heads of the Commission and the European Central Bank and to the European Parliament.
In Spain, Barcelona's anarchists have been conducting a low-level campaign against bank cash machines, supermarkets, and firms such as Manpower. Valencia and Galicia have seen a wave of attacks. "
And he quotes Europol as saying: "Activities by left-wing and anarchist terrorists and extremists are increasing in quantity and geographical spread in the EU."
Posted by The Vast Minority at 02:55