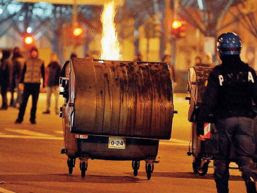 POLICE in Turin used armoured cars and brutal methods to clear radical squats on Thursday, it has been reported.

In response a major protest in defence of free spaces has been called for Saturday 19th December at 2pm in front of Torino Porta Susa Train Station.

A report posted on Indymedia described how people blocked the streets in solidarity, stopping the cherry-pickers from getting in, leading to police charges which eventually involved tear gas.

It added: "The protestors resist a little and then disperse, with one arrest, and there is some rioting in the surrounding streets.

"After having cleared all watchful eyes from the area, the forces of order go on to take revenge on the protesters' cars (searching them and ripping off windshield wipers) and sound-systems and mini-kitchens set up for the event are taken to the dump at Via dall'Amiat. Then the eviction begins.

"The infamous cops reach the roof of L'ostile and take down 3 of the 6 who are resisting there; shortly after they pull the remaining three down by force. The radio is talking about burning wheelie-bins in the surrounding streets.

"The cops charge in Piaza Crispi again, with greater presence, shooting tear gas at head hight; after the charge, morale is still high and people are still massing in Piaza Crispi. They block the junction; the charges and counter charges continue, and the cops are now supported by armoured vehicles that are not moving, for now.

"Two people are wounded (a broken finger for one, a boot in the face for another) and two arrested. Taking advantage of the police charge, a van speeds away to take the folks from L'ostile to the police station in Via Tirreno."
Posted by The Vast Minority at 02:39