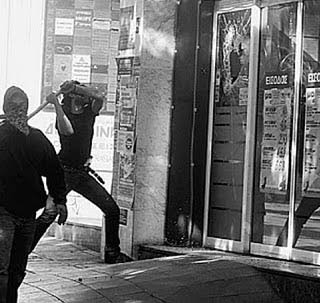 RESISTANCE to the neo-liberal junta in Greece is spreading beyond the big cities.
Report Associated Press today: "Greek police say a group of suspected anarchist youths has attacked bank branches in the northern town of Kavala with sledgehammers and petrol bombs.
"Some 15 hooded youths smashed the glass fronts of an Alpha Bank and Bank of Cyprus branch late Wednesday and threw in petrol bombs, police said. Another two banks had their windows smashed.
"All four banks had closed for business hours earlier, and no injuries or arrests were reported. The extent of the damage was not immediately clear. Kavala is some 100 miles (170 kilometers) east of Thessaloniki.
"Greek anarchists frequently firebomb symbols of wealth and authority, but attacks by groups of youths on the street are rare outside the country's two main cities. "
This photo was published by the Greek site Sportime.
Posted by The Vast Minority at 02:48