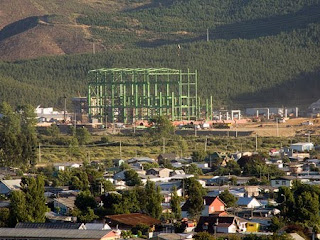 A HOMEMADE explosive device went off early on Saturday morning on the outskirts of the Colbún thermoelectric plant located alongside Route 160 in Concepción, Chile, report Liberacion Total and this is our job.
Said the sites: "The explosion happened at around midnight, and it affected a security post housing a water meter located more than 200 meters from the plant entrance. The explosion also destroyed a water conduit valve.
"Upon hearing the explosion, company security guards alerted the Carabineros, who turned to GOPE personnel in order to investigate the situation.
"The tyrants confirmed the presence of an explosive device, adding that they found black powder residue, which had been detonated with a slow-burning fuse at the scene."
There is another Spanish-langauge report here.
Posted by The Vast Minority at 05:36