Unauthorised routes of protest lie ahead 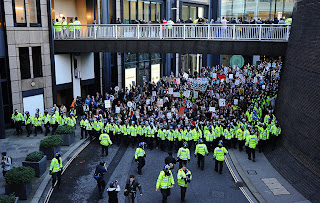 THE BRITISH authorities and their hired thugs are feeling pretty pleased with themselves.

A potential outbreak of dissent on the streets of London on November 9 was controlled and corralled to an efficient extent.

It did take the threat of rubber bullets, a concerted media campaign, intimidation by letter of potential protesters and 4,000 cops with horses and crowd control barriers along the route of the student march (plus some undercover), but this was no doubt a price worth paying for those in charge of maintaining business as usual.

There was certainly no sense of official embarrassment that cops were clutching riot helmets before the demonstration had even begun, let alone kicked off, or that at the completion of a ‘legitimate’ A to B procession people found themselves in a de facto kettle, which they could only exit one at a time through two police cordons to enable them to be individually photographed by police ‘evidence gatherers’.

There seemed no sense of surprise among the protesters, either, that the mere act of marching against the government has apparently become criminalised in an Orwellian state running 27 years behind schedule.

But there were also signs of changing times. Not only were the anti-capitalist marchers applauded by builders on the scaffolding near Waterloo Bridge – itself unthinkable ten years ago – but they were also cheered by some of the besuited office workers at London Wall.

Despite the overhwelming force that the British state brought to bear on its young opponents in London, the panicked looks on the faces of some of the police at the slightest signs of defiance spoke much about what lies ahead.

Police and government know full well that the current capitalist crisis is not going away any time soon and neither is the swelling tide of resistance.

The course of a river can be temporarily dammed with riot shields and snarling masked goons, but water has a wonderful way of finding its way past any obstacle.

November 9 was a battle fought according to state rules on its own terrain and it is little surprise, in truth, that might prevailed.

On other occasions, however, the police chiefs’ arrogance will no doubt be found to be sorely misplaced, as the flood of revolt breaks out into wholly unauthorised routes of protest.
Posted by The Vast Minority at 11:22