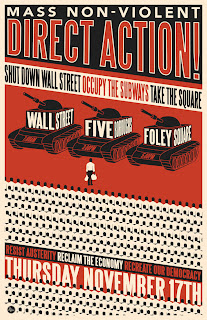 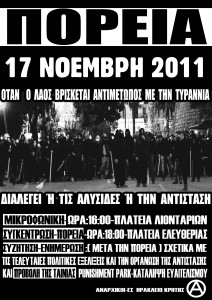 NOVEMBER 17 will be an important day for democracy on two continents, with big protests against neoliberal tyranny lined up.

Greece will see the first large-scale reaction on the streets to the imposition of an unelected banker leader.

Writes From The Greek Streets: "The build-up for the annual commemorative events for the anti-dictatorial student uprising of 1973 is fully underway, with demonstrations planned across Greece.

"In Athens and in Heraclion, at least, some anarchist blocks will use the same slogan that had been used by the EAM, the communist movement of armed resistance against the Nazi occupation: 'when the people are confronted with the threat of tyranny, they either chose the chains or the guns'.”

Meanwhile, the same day has been chosen for a national day of action by the Occupy movement in the USA, with protests in New York's Wall Street - following the brutal eviction of the Zuccotti Park camp - and in many other cities includng Los Angeles, Chicago and Washington DC.
Posted by The Vast Minority at 23:18