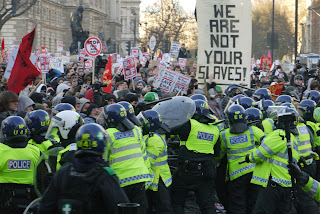 BRITISH authorities are panicking at the prospect of another massive and angry student protest in London this week.

The right-wing Evening Standard today published a police-inspired scare story claiming there are fears the November 9 protest "could be hijacked by anarchists".

Says the report: "Police leave has been cancelled and reinforcements called in from county forces for the demonstration which organisers say will attract 10,000 people on a march through the City.

"Protesters are urging schoolchildren to walk out of lessons for the demo on Wednesday.

"The National Campaign Against Fees and Cuts, which is organising the action, has given students training on recruiting schoolchildren, with one leaflet saying: 'The riots this summer show beyond doubt that lots of young people are burning with intense anger, frustration and willingness to take some pretty extreme action.'

"The march will meet up with St Paul's protesters. Scotland Yard says it will distribute thousands of leaflets to students warning of the consequences of criminal actions. There are fears that the march could see a repeat of the violence and chaos of last year's student protests.

"Hundreds were arrested as protesters and activists attacked banks and shops.

"Commander Simon Pountain said: 'In our experience a lot of these type of demonstrations attract people from so-called anarchist groups and we would expect that to happen. We will be prepared for every eventuality.' Police have vetoed a bid for the protesters to march on the Bank of England because of the possible numbers.

"Michael Chessum, from the organiser NCAFC, defended plans to encourage schoolchildren to join the march. He said: 'We believe that this is about the future of people who are not going to university and it's only right that they join in.'

"He added leaflets had been handed out to sixth formers and older pupils. The campaign group said the march against the 'marketisation' of universities by the Government will herald an 'autumn of resistance'."

Over the weekend Universities Minister David Willetts also admitted he was worried about another student uprising in the capital, declaring: "I think it would be appalling if we had a repeat of those shocking events earlier in the year. I think it really would be very bad indeed."
Posted by The Vast Minority at 06:06