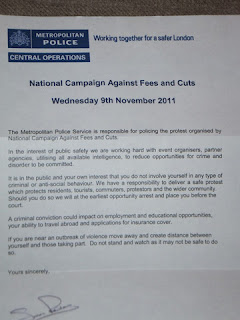 POLICE in London are ramping up the intimidation ahead of Wednesday's big student and union  protests in the British capital.

In a blog entry entitled "Don't be intimidated, see you on the streets", police monitoring group Fitwatch reports that letters have been sent to protesters on police files trying to put them off turning up.

Says the report: "On the eve of the mass education/sparks/cabbies protest on 9th November, it is clear the state are trying to intimidate us.

"From the news today that the police have written to protesters arrested at previous demonstrations warning them off protesting (see picture), to the “total policing” of the last couple of weeks witnessed at the squatting demo and deaths in custody march (amongst others), the message is clear; attempt to protest and the state will clamp down, act violently, and make arbitrary arrests.

"And, if you’re unlucky enough to get caught, the courts are making sure long deterrent sentences are passed, regardless of how insignificant the individual action, in attempt to scare us away from future protest.

"However, whilst even seasoned activists have admitted to being a little scared at the current state of policing, it’s not all doom and gloom, and we mustn’t be tricked into feeling intimidated.

"It’s nearly the anniversary of the Met’s attempt to silence Fitwatch for giving common sense advice to the Millbank protesters. This is still recommended reading, as is this Fitwatch call to action.

"Above all, we should be applying the lessons we have learnt on the streets over the last year. When we don’t just ‘walk on by’, and act in solidarity with each other, we are stronger; when we act as fast mobile blocs, we are more effective and harder to contain; when we sit down or put our hands in the air, we are fodder for baton strikes and kettling; when we refuse to play the divide and rule game and condemn fellow protesters, we are more threatening.

"And finally, and perhaps most importantly, when we mask up, and make no comment to police questioning, we are harder to convict and lock up.