New wave of anger at US empire 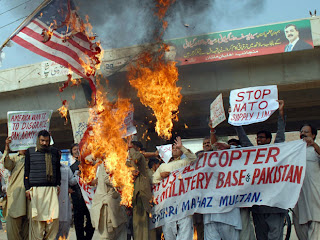 In revenge, the state has given the US 15 days to vacate an airbase used as a key launchpad for drone strikes in Afghanistan and also shut down NATO supply routes into the neighbouring country, which has been under neoliberal occupation for ten years.

American flags have been burned in the streets, Pakistanis took to social media websites to express their dismay and the media reflected the public anger over the attack.

"US stabs Pakistan in the back, again," said a headline in the Daily Times while headline in The Express Tribune read: "Pakistan inflamed as 24 killed in Nato strike".