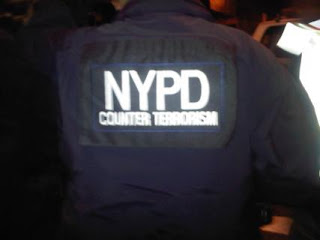 The state thugs kettled off the whole area in the middle of the night, closed subway stations and stopped both press and camp supporters from reaching Zuccotti Park to help or witness what was happening.

There were confirmed reports of pepper spray being used on protesters and of police laughing and smiling as they ripped apart the tents and infrastructure of the anti-capitalist community that sparked a movement across the USA and beyond.

Some of the cops involved were from the 'Counter Terrorism' force (see photo), confirming that for the neoliberal global regime a 'terrorist' is simply a term to describe anyone who challenges their domination.

A protest march on the Wall Street stock exchange is planned for Thursday November 17 - let's hope this is now bigger and angrier than ever as the harsh reality of the capitalist tyranny becomes more and more apparent for all to see.
Posted by The Vast Minority at 23:35