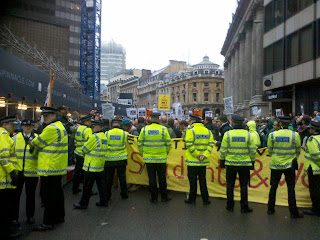 RESISTANCE began early in London on November 9 with 1,000 electricians marching through the city.

There were early reports of police lines being broken as the workers refused to be halted.

Protests have been growing against de-skilling and pay cuts being imposed by a group of construction firms.

Autonomous trade unionists are expected to join forces with the student protest and Occupy London later in the day.
Posted by The Vast Minority at 01:02