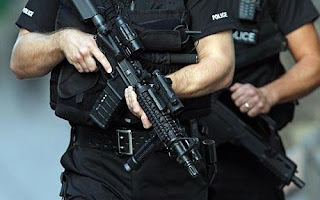 FRIGHTENING plans for machine-gun-toting police patrolling the streets of London have been withdrawn by the British state, for the time being, following widespread public outrage.

Reported The Daily Mail on October 28: "The plans would have seen police marksman on motorbikes and on foot carrying Heckler & Koch MP5 single-fire carbine guns and Glock semi-automatic pistols and joining other officers on regular patrols in three crime hotspots in Brixton, Haringey and Tottenham."

It quoted Met Commissioner Sir Paul Stephenson as saying: "The way in which we have communicated this has led to the mistaken impression that we have created regular armed uniform foot patrols.
"That is not the case and it is not going to happen. I am very proud of the unarmed civilian service tradition of the Metropolitan Police Service and am determined to uphold it."
Posted by The Vast Minority at 02:09