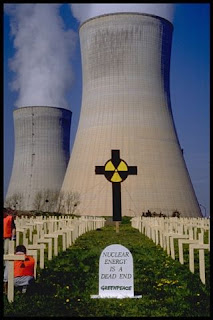 THE SINISTER role of an armed police force funded by the nuclear industry has been exposed by a report in The Guardian.

The Civil Nuclear Constabulary is not just about physically protecting nuclear power stations, but is also carrying out a Gestapo-style war against political opponents of the controversial industry.

Reveals the newspaper's report: "The force is authorised to send informers to infiltrate organisations and to conduct undercover surveillance under the Regulation of Investigatory Powers Act 2000 (RIPA). It is also permitted to obtain communications data such as phone numbers and email addresses."
It also quotes Sir Christopher Rose, the chief surveillance commissioner, as saying: "The strategic aims of the constabulary remain on the threat from terrorism and public disquiet over nuclear matters, including demonstrations/protests and criminal offences towards nuclear movements/installations."
So "public disquiet" is now classed as a crime?
This example reveals the truth behind policing in general. The police are not there to protect us, as it is always claimed, but instead to protect powerful vested interests from us, from our scrutiny and from our disquiet.
Posted by The Vast Minority at 01:14