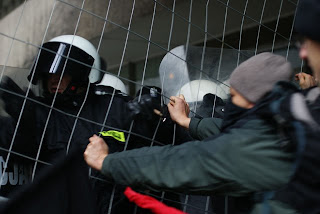 PROTESTERS clashed with police in Poznan, Poland on Friday October 23, when almost 4,000 workers from different trade unions took to the streets, backed by anarchist groups.

About 500 people are going to be fired from the Cegielski factory. But while the reason cited was the so-called economic crisis, people in Poland, as elsewhere, are waking up to the fact that this is being used as a convenient excuse to screw the workforce yet further and erode hard-earned rights.

Angry scenes saw chants such as “A worker dismissed, a boss hanged!” and “Capitalism isn't working! Factories under the control of workers!”, reports Polish website rozbrat.org, which also features links to dramatic video footage of the conflict.

The Rhythms of Resistance samba group from Poznan supported the demo with their rhythms. A banner saying “A worker dismissed, a boss hanged” was dropped from one building on the route of the demo.

After the demonstration had finished, the cops on horses surrounded a group of anarchists and activists, as well as people from the Cegielski factory, and took their IDs.

At the same time one of the Workers' Initiative activists interrupted a live TV interview given by the boss of the trade union Solidarnosc and said “The members of our union are being nicked over there, and people from Solidarnosc are doing nothing about it, where is your solidarity?!”.

This event was transmitted live to the public TV news. None of the demonstrators was arrested. Three cops and one unionist were injured and hospitalized.
Posted by The Vast Minority at 03:35