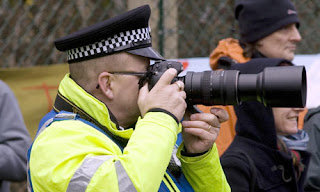 THE SINISTER role of Big Business behind Britain's political police has been exposed in an article in The Guardian today, October 26.

Anyone who dares challenge the corporate consensus by even peaceful protest is now categorised as a "domestic extremist" by the state and subjected to surveillance and investigation as if they were involved in criminal activity.

And the head of one of the main Gestapo-style units has admitted that the capitalist fat cats themselves were behind this stepping-up of the elite's war on free speech and democracy.

Superintendent Steve Pearl of the National Extremism Tactical Co-ordination Unit (Netcu), said his unit was set up in Huntingdon, Cambridgeshire in 2004 by the Home Office which, Pearl said, was "getting really pressurised by big business – pharmaceuticals in particular, and the banks – that they were not able to go about their lawful business because of the extreme criminal behaviour of some people within the animal rights movement."
Since then, its role has expanded to take in environmental and other protesters.

Comedian Mark Thomas is one of those who found himself a target of the thought police, with his photo appearing on a "spotter card" of protesters used by the cops at an anti-militarist protest, despite the fact that he has no criminal convictions.

He writes in The Guardian: "The very phrase "domestic extremist" defines protesters in the eyes of the police as the problem, the enemy. Spying on entire groups and organisations, and targeting the innocent, undermines not only our rights but the law – frightfully silly of me to drag this into an argument about policing, I know.

"A police spokesman has said that anyone who finds themselves on a database "should not worry at all". When a spokesman for the three secret units will not disclose a breakdown of their budgets, and two of the three will not even name who heads their operations (even MI6 gave us an initial, for God's sake), then the words "should not worry at all" are meaningless. Indeed, when the police admit that someone could end up on a secret police database merely for attending a demonstration, it is exactly the time to worry."
Posted by The Vast Minority at 03:42